Chairperson Ruppert called the meeting to order at 10:02 am. Mr. Ruppert welcomed Mr. Jeff LaGrange as the new administrator representing the Police Jury on the Board. He then requested roll call from Secretary Krennerich. The following board members were in attendance:  Chairperson, Gregory Ruppert (proxy for Michael Ranatza), Jeanine Theriot, John Gallagher, and Mark West (proxy for Guy Cormier), , Amber Hymel, Jeff LaGrange and Kressynda Krennerich. Also present were Executive Director Roger Bergeron and Andrew Kolb, counsel for the Board.

A motion was made by Ms. Hymel, seconded by Ms. Theriot and carried to adopt the agenda as posted for the July 25, 2019 meeting.

Ms. Theriot offered an amendment to the minutes of the May 16, 2019 Special Meeting: the regular meetings of the Remote Sellers Commission was changed to the second Thursday of the month – not the third. There was a motion by Ms. Theriot, seconded by Mr. Ruppert and carried to accept the minutes of the June 13, 2019 meeting and May16, 2019 Special Meeting as amended.

Ms. Krennerich received an email inquiring if all local ordinances were maintained in a single repository. A discussion was held whereby the Municode website and clerk of courts were offered as resources. The Legislature would need to mandate the filing of all ordinances and updates in order to have a reliable source for such a project.

The request for proposal for a Sale Tax Return and Remittance System was reviewed by Board members. Minor amendments were offered by Mr. Kolb to comply with the scheduling requirements of RFP’s. Notice of the amended RFP will be posted on the Louisiana Uniform Local Sales Tax Board’s website, the Louisiana Boards and Commissions’ website and published in the Board’s official journal, the Baton Rouge Advocate.

Mr. Kolb had discussions with Tax Watch Systems for location software services needed for the “Look Up Tool” the Board wants to develop. Tax Watch Systems currently has a contact with the Louisiana OMV. Preliminary cost would be $84,000 annually with a 50% contract fee for overages of One Million transactions within a given period. Additional discussions are needed to clarify the usage limitations.

The VDA application and process is in the testing phase. The program is expected to be on the website in August. Mr. Bergeron currently has four submitted applications with the number of parishes varying from 10-40.

Remote Sellers Information Bulletins. Ruppert asked the Board to review the draft of No. 19-003. He would like the Board to obtain legal opinions on three items:

Ms. Theriot advised the Board that the Commission currently utilizes the legal services of Mr. Luke Morris with LDR for Commission matters. Mr. West strongly urged the Board employ an attorney to review the issues raised by Mr. Ruppert. Mr. Kolb will research the proper entity to issue the information bulletin. Administrators on the Board will seek options with their individual attorney on the matters of charging incremental tax and exemption application of locals on remote seller transactions.

A motion to adjourn at 1:29 pm was made by Ms. Hymel, seconded by Mr. LaGrange and unanimously passed by the Board. 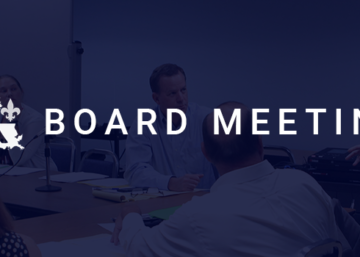